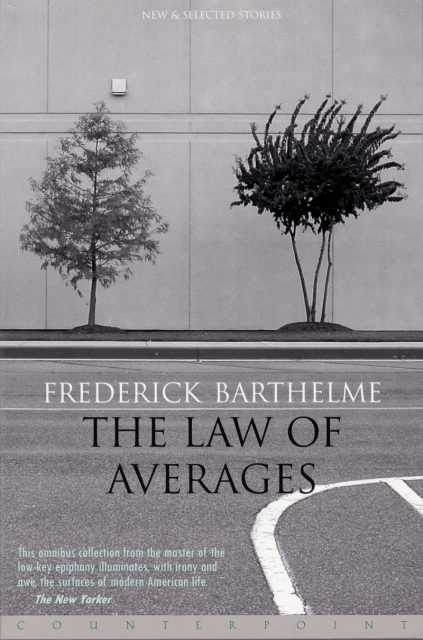 From The New Yorker
“This omnibus collection from the master of the low-key epiphany illuminates, with irony and awe, the surfaces of modern American life.”

From Ken Foster, San Francisco Chronicle
“One of the joys of seeing Barthelme’s work recollected is the pleasure of reading fiction in which the problems are not solved, the conflicts not resolved, the narrator’s pathology left somewhat to the imagination. Any teacher, any workshop, any critic, any anonymous Amazon customer review would advise against these things. We want closure, they would say. We want a sympathetic narrator. We want more of an arc. We want certainty.  But Barthelme doesn’t simply ignore these expectations, he transcends them, creating portraits of minimalist, ordinary, “static” lives that somehow are anything but minimalist and static. He has that generous, remarkable quality that so many writers lack: He trusts the readers to interpret his material and make it their own. . . . A reminder of just how a writer can inspire readers to marvel.”

From the Minneapolis Star Tribune
“As they stumble through life, these characters grow harder and grimmer, yet somehow always retain their ability to see the lyrical strangeness of things. Barthelme is a genius at evoking such moments of revelation. Our lives are formed by averages, he suggests, and the highs can come at any time.”

From Mirela Roncevic, Library Journal
“As we perfect our modern way of life, we strive to perfect the way we look, think, and even behave. But can we ever escape the norm–that which makes us ordinary rather than extraordinary? Barthelme prudently calls this norm “the law of averages” and explores its logic in this collection of simple but far from simplistic short stories. His witty approach to the mundane reveals that what makes his characters remarkable is precisely the unremarkable way in which they subsist in “that tiny circle of confusion where [they] have some influence.” Dealing with all sorts of domestic circumstances, the stories are mostly written in the first-person and evoke the (same?) male protagonist characterized by shrewd observation and the inability to interact with others. The point that everything somehow matters is often hidden in the titles, which reinforce the weight of the ennui that plagues even the most sophisticated characters. The endings, on the other hand, imply a continuation of the existing dilemma and bring to mind Chekhov’s inconclusive denouements. Although Barthelme (Bob the Gambler) is a prolific and skilled novelist, it is this kind of short story craft that makes him an inimitable voice in American postmodernism.”

From Publisher’s Weekly
There are writers who believe they need a giant canvas to represent history, while others know they can convey as much in an exquisitely detailed miniature. This collection of 29 stories, including several new ones and spanning 20 years of the author’s career, exhibits Barthelme’s (Bob the Gambler) power as a miniaturist, expertly finding drama and meaning in those fleeting, significant moments when the raised voice or the irreparable breach are avoided. The first story, “Shopgirls,” is written in the second person, initiating an unsettling intimacy between reader and narrator: “You watch the pretty salesgirl slide a box of Halston soap onto a low shelf…. ” The narrator stalks three attractive young women working in a mall, who confront and eventually confound him–a situation that echoes throughout many of the pieces written in the ’80s, in which male protagonists are often at the mercy of women in control. “Instructor” is typical: David is an academic interviewing at a small Alabama college for a temporary position as a biology instructor, and is escorted around town by Sonia, an accomplished, redhaired associate professor who’s also a captivating, if not especially choosy, seductress. “Reset” begins: “People at the office assumed Ann and I had been having an affair for the five years she’d been working for me.” From that wonderfully suggestive beginning, the story explores the jealousy, affection and inertia between the two co-workers. Many of the older tales (some were published in Esquire, GQ and the New Yorker) in this collection display Barthelme’s burgeoning gift for polished prose, nuanced dialogue and short, zinger sentences, while the more recent ones tend toward a relaxation of those fine-tuned characteristics. All of these stories together, however, show off the range of this wickedly intelligent writer’s unique craft. (Oct.) Copyright 2000 Cahners Business Information.|

From Kirkus
Some contemporary shortstory writers create a sense of ennui by dispensing with plot; generous Barthelme often spins out more events in an opening paragraph than you’d expect from a whole story, then goes right on spinning till his people are tangled in a world so thick with incident that their lives seem spun even more hauntingly out of control. In the 6 new stories among the 29 collected here, a father worried about his teenaged daughter looks up from charting his favorite stock on the computer when he hears a car hit a tree in his front yard; romance blooms with suspicious ease between a history teacher and the woman he meets at a car wash; a teenager’s parents recover from their wounding by conveniencestore robbers, but then Mama shoots Daddy for playing around with Riva Jay. And that’s just for starters.