A few interviews and such to coincide with the publication of There must Be Some Mistake. The titles link to the full texts. Pictured is the paperback of the book, published in May 2017. 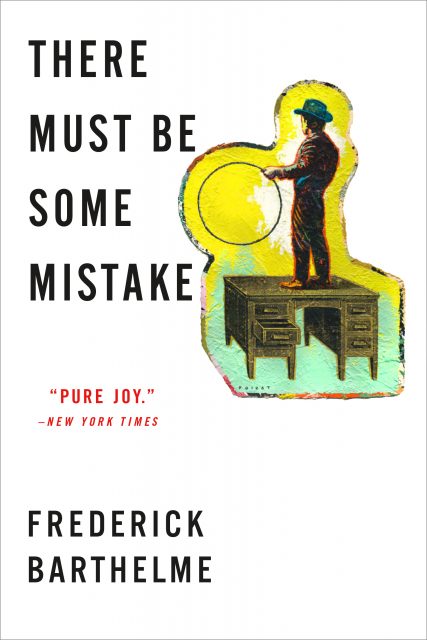 “All along the coast, here in Destin or in Galveston or wherever, it’s half chain restaurants and gas stations and condos, and half the world of the ’40s and ’50s–crumbling houses, apartment buildings, nightclubs and so on. And a building in the shape of a crocodile.”

“I hope that the book is about, finally, being “thrown toward death.” This feeling, which is not so much of a bother when you’re a youngster, becomes more troubling as you cross your majority and sail into your “later years.” People begin dying all around you and you can’t help noticing. “Oh? She’s gone?” Yes, she is. Dead as a doornail. And her and him, and those guys, and these two other fellas. Bang. In time your Contact List is littered with the dead. So. What do you do? Do you erase them from your contact list? This is a terrible question and one which, in a small way, the novel hopes to reflect upon.“

“I don’t know that I ever had a student that I actively disliked—okay, I can think of one. Two. Some were difficult, of course, but almost all of them were serious, complex, talented in various degrees, forthcoming, clever, funny—I mean, I could go on with this list of students’ virtues. Aside from the guy with the plate in his head who threatened me elaborately in pidgin English, and the one who plagiarized rather more of his thesis than is generally thought to be good form, I liked them all.”

The Omnivoracious “How I Wrote It” Column

“I like things quiet when I work, so night is good. I love the ringing in my ears and the comforting hum of the air conditioning, the hiss of cars speeding by . . . and I love the sounds made by home appliances–dishwashers, clothes washers and dryers, hot water heaters, coffee makers. Some years ago I made a forty-two minute gourmet recording of my dishwasher. I made a demo CD called Great Washer and it was beautiful. It did not fly. But now, these many years later, some shallow personages are posting low quality digital files of their lesser dishwashers on The YouTube. Sleep aids, they say.”