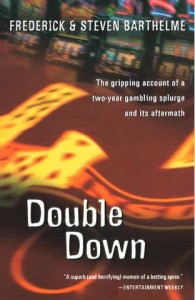 From The Wall Street Journal

Double Down: Reflections on Gambling and Loss, jointly written and told in the third person, is an exquisitely crafted memoir of their three years in the grips of Mississippi casinos. It is distinguished from the raft of recent addiction tales not just by the quality of the prose but also by a bizarre turn that landed the brothers in the headlines and in the maw of the Mississippi judicial system.

From David Gates, Newsweek
“Their redemption is the book itself, in which shell shock is transfigured by literary grace.”

From Tom De Haven, Entertainment Weekly
“[a] superb (and horrifying) memoir… Double Down is also an unsentimental, even edgy meditation on the loss of one’s parents and the often crazy-making trauma of being orphaned in midlife.”

From Library Journal
Beautifully evoking the gamblers’ addiction, their mesmerizing account is best read as a novel Camus might have imagined, with the writer/protagonists as their own lost characters. A work of high art; enthusiastically recommended. [Previewed in Prepub Alert, LJ 7/99.]

The New York Times
“For the Barthelmes [Double Down] suggests the dual downward spiral they suffered in losing so much money and their parents in a short span of time. They relate both stories in a style so seamless that it’s hard to tell you are reading a collaboration.”

The Washington Post
“The Barthelmes recount in vivid detail and with good psychological insight the trauma of coping with that dual loss.”

Publisher’s Weekly Starred Review
“The tale they have to tell is far more richly complicated–and haunting–than any their lawyer could present…By turns dazzingly canny and achingly abject, the Barthelmes, who write in a single voice, lure the reader into the intimacy of their self-deception.”

Rick Bass
Double Down is an astounding book–lucid and hypnotic. I read it as if witnessing a not-so-small miracle in which a fall from grace is inverted, mid-air, and turned into a fall toward grace. It is clean and crisp and important.

James Lee Burke, author of Burning Angel and Cadillac Jukebox
Anyone who buys into the insane conclusion that casino gambling is good for a community should read this book. Double Down is one of the best firsthand accounts ever written about organized gambling. Like Goodman Brown, taking a walk with a hooded stranger into the darkness of the New England woods, the Barthelme brothers suddenly find themselves inside the maw of the monster. The compulsion to control, to intuit the future, to be painted by magic, could not be better or more accurately described.

Larry Brown
“Whoever invented gambling knew something about human nature the rest of us have to keep rediscovering. Double Down is a gripping read.”

Thom Jones
“Frederick and Steven Barthelme have written one of the great books on gambling–a memoir of guilt, frustration, the wickedness of American justice, and, above all, the hair-raising rush of the action.”

Rick Moody
“This is one of the most lucid and fascinating books on compulsion and the complex psychology of family I’ve ever read. The Barthelme brothers are gambling even now, in these pages, by laying aside some of their brilliant strategies of the past so that you might see clearly into their bereaved hearts. The result is arresting, sad, funny, true. You read Double Down the way you might play cards, well into the night, worried about the outcome, dazzled by the company.”

Walter Kim, New York Magazine
“What DOUBLE DOWN teaches that other memoirs don’t–preoccupied, as they tend to be, with the triumph of the individual–is that while we’re busy playing at life, life is playing with us as well. And, like the casinos, it always has an edge.”

Elle, Francine Prose
When their mother died in 1995, Frederick and Steven Barthelme found a welcome distraction from grief and from their “awfully sweet lives” (as writers and university teachers) on the casino boats anchored off the Mississippi coast. Their fascination with gambling intensified until, after the death of their father, sixteen months later, “an avalanche began.” By the time the brothers were arrested for allegedly cheating at blackjack, they’d managed to squander a quarter-million-dollar inheritance. The facts of their case–the charges against them were recently dropped–have received considerable publicity. Yet Double Down, their collective memoir, is fresh, fascinating, and–with its tone pitched halfway between sheer heartbreak and ironic detachment–deeply moving. What gives their beautifully written book its power are the same gifts that distinguish the Barthelmes’ fiction: their intelligence, their eye for detail, and their wry bemusement at the unlucky, unlikely hands that life so often deals.

From Robert R. Harris – The New York Times Book Review
To double down in blackjack is to double your original bet before taking a hit, or a third card. Usually you want to double down when your first two cards total eleven and the dealer is showing, say, a five or a six; in this case, the odds can actually be with you, and the chance of really having fun is greatly increased. For the Barthelmes the phrase also suggests the dual downward spirals they suffered in losing so much money and their parents in a short span of time. They relate both stories in a style so seamless that it’s hard to tell you are reading a collaboration. The narrative voice varies from the first-person plural to the third person to the second person, and it’s never jarring and almost always absorbing.

From Publisher’s Weekly
In the legal system, whoever tells the best story wins. But when two “workaday English teachers”–who happen to be the writers Frederick Barthelme (Bob the Gambler) and Steven Barthelme (And He Tells the Horse the Whole Story)–gamble away their $250,000 inheritance in a few years and are indicted for conspiracy to defraud the casino where they were regulars, the tale they have to tell is far more richly complicated–and haunting–than any their lawyer could present. Their narrative seductively juxtaposes the stark loss of their parents, their family’s “psychological arithmetic” and the “miraculous multiplication” of winning at the blackjack tables, moving fluently between an account of the brothers’ fall into addiction and their memories of a family life that was like “a lovely old-fashioned movie with snappy dialogue and surprising developments, high drama and low comedy, heroes and villains, wit and beauty and regret.” By turns dazzlingly canny and achingly abject, the Barthelmes, who write in a single voice, lure the reader into the intimacy of their self-deception. Intoxicated by their brinksmanship and their clever comebacks, readers will hope against hope they’ll fight their way back from staggering losses. In retrospect, the brothers’ gaming philosophy–”We would have been willing to win, but we were content to lose”–was sustaining in the casino’s mirror world where “money isn’t money,” although, as the authors wryly observe, it crumbled when they were awaiting a legal verdict. (Nov.) FYI: Filed a few weeks after the publication of Bob the Gambler in 1997, the charges against the brothers were dismissed by the Mississippi State Circuit Court in August 1999. Copyright 1999 Cahners Business Information.