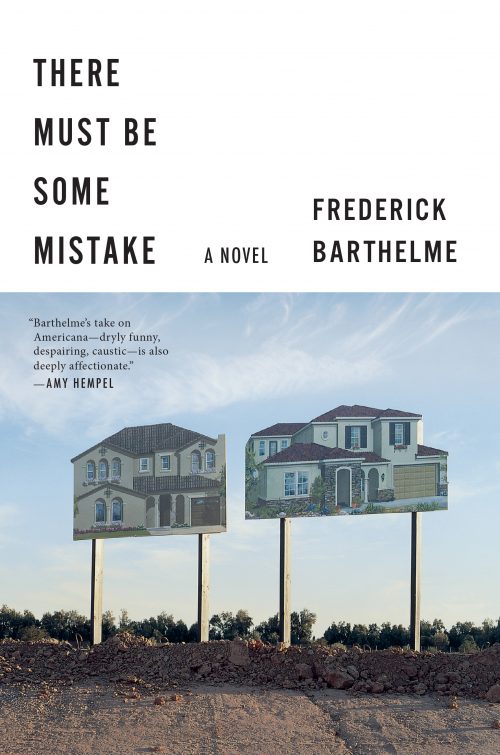 Barthelme (Waveland, 2009), invites us to see life through artist Wallace Webster’s acutely receptive eyes. Shocked to be pushed out of the design firm he helped create, Wallace finds himself reveling in the views from his Forgetful Bay condo and enjoying serendipitous visits with his sharp-witted, college student daughter, Morgan, and, Jilly, a considerably younger former coworker. But Forgetful Bay is under siege. Sexy and darkly enigmatic Chantal is tied up and painted blue. Someone is shot. Someone else shoots himself. Detective Jean Darling questions Wallace repeatedly, Jilly’s abusive ex seduces every other woman in Wallace’s life, and Chantal’s tattooed performance artist daughter, Tinker, appears in a nimbus of menace. Yet Wallace, a boardwalk Buddha spellbound by the seedy beauty and high-caloric cuisine of the Texas coast, remains content to let things take their course, however dire. Propelled by staccato dialogue and a soundtrack of trashy television shows, Barthelme’s devilishly funny, gorgeously atmospheric, and wryly noirish farce brilliantly poses provocative questions about artifice and reality, loyalty and love, cowardice and valor.

With a divorced male in his 50s living on the Gulf Coast and sorting out various female attachments, this 15th book of fiction from Barthelme (Waveland, 2009, etc.) covers turf similar to that of his last two novels. Wallace Webster occupies a condo in a development called Forgetful Bay in a town halfway between Galveston and Houston in the century’s second decade. He’s on affectionate terms with four women: his dead first wife’s daughter, his living ex-wife, a younger ex-colleague and an age-appropriate casual lover from a neighboring condo named Chantal White. Her rich history will punctuate the book with moments of violence after she’s introduced in her kitchen bound by an intruder with picture-hanging wire and smeared with Yves Klein blue paint (Wallace, like the author, was once an artist and knows color). Another neighbor will get a bullet in the head that may be self-inflicted or a parting shot from his wife, miffed perhaps because a woman in a black slip and heels was dancing early one morning in their driveway. Such incidents provide the only significant action and a little mystery in Wallace’s otherwise quiet life of navigating among his women and memories, dabbling in questions of faith, love and death. He’s “interested in the surfaces” and makes “small pictures, collages, postcards, other almost miniature objects”—which is a fair description of Barthelme’s craft. The dialogue, while entertainingly clever, presents almost every speaker as tersely ironic and in danger of sounding like Seinfeld via Elmore Leonard. His prose sometimes blossoms, though, as in a description of grade-school nuns “who streamed out of the convent like so many ants the better to look me over and tsk and tsk and click their little black beads.” Barthelme doesn’t resolve everything for Wallace, and the ending will have book clubs arguing for hours.

Understated, seemingly offhanded, Barthelme’s writing conveys much about the oddities of contemporary life with warmth and welcome humor.

Barthelme, a master of minimalist suburbia-set fiction (Waveland), returns with a buoyantly offbeat murder tale that doubles as a meditation on everything from contemporary art to Google to mortality. The setting is Forgetful Bay, a condo development in Kemah, Tex., where 50-something Wallace Webster lives alone. His solitary existence is interrupted mainly by visits from Jilly, a younger former coworker of his, and Morgan, his college-age daughter from a failed marriage. Then, a slew of apparently accidental deaths strikes the neighborhood, along with a few other strange incidents—notably, a woman, Chantal White, being doused with Yves Klein blue paint in a guerilla-like attack. After Wallace begins an affair with Chantal, police investigators come to see him, but rather than feeling frightened, he finds their questions “oddly reassuring…. Like your life imitating television.” Throughout the novel, his narration provides punchy, wry commentary on the banality of pop culture, but the tone is, ultimately, infectiously optimistic. Taking inventory of his neighbors’ kitschy lawn statuary, Wallace considers getting a few gnomes or a Virgin Mary of his own. “I mean, why not? Where’s the harm in a little blind faith, a little hope in the face of the grotesque spectacle of ordinary life in this century?”